Who is Isaac Hull? 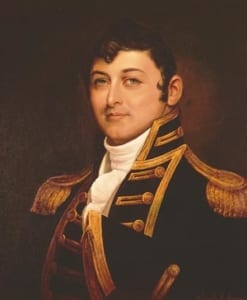 Question: Who is Isaac Hull?

Answer: Isaac Hull was both a hero and one of the most important leaders of the early U.S. Navy. He was born in Connecticut in 1773. His father was an officer under George Washington during the Revolution who died aboard a British prison ship in 1775. Young Isaac was raised by General William Hull of the Continental Army, who wanted him to go to college, but the boy loved the sea and became a cabin boy in 1787.

Isaac Hull showed great personal bravery from a young age. At 16, he rescued the captain of his ship when the vessel wrecked, dragging the man nearly a mile through the water to the shore. He was quickly given command of another merchant vessel in the West Indies, where he performed so well that when the United States Navy was formed, he was directly commissioned as an officer.

He served on frigate Constitution during the Quasi-War with France and led a cutting out action (essentially sanctioned piracy) of a French ship in Santo Domingo. His citation for this action included the phrase “reflects the highest credit upon Lieutenant Hull”, a phrase still used in citations for Navy awards today.

By 1811, Hull was the captain of the Constitution. Here he led the most famous of American ships on many of its most famous missions. He skillfully evaded impoundment of the ship in Annapolis by out-sailing an entire flotilla of British ships in a dead calm. He then sailed the ship to Boston where he took her against
the British frigate Guerriere in the battle that earned Constitution her nick name “Old Ironsides”, completely destroying the Guerriere while only losing 7 American lives. This last victory had a huge impact
on American morale in a war that was going poorly until
then. He and his crew were awarded $50,000 as prize-money for the victory, a small fortune at the time.

After command of the Constitution, Hull was on the naval board and oversaw the Washington Navy Yard reconstruction after it was burned by the British. He also later led squadrons of ships in the Pacific and Mediterranean.

Isaac Hull died in 1843 in Philadelphia after 37 years of service to the U.S. Navy. One of the main roads at the Navy Yard is named in his honor.

TMB Around the World
Scroll to top