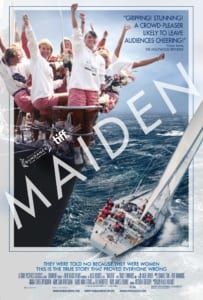 In the 1970’s Tracy Edwards was an intelligent student living in Wales England with dreams of becoming a ballet dancer. But after the death of her father
at age 10 she began to get into adolescent trouble. At 16 she was expelled from school leading her to decide on a whim to sign up as a stewardess, aka “cook,” on an all-male yacht which was her first introduction to sailing.

During a stopover in the United States she met King Hussein of Jordan who encouraged her to buy her own yacht to compete in the 1989 prestigious Whitbread Round the World 33K Mile Race with an all-female crew. With zero sailing experience among them, the 12-woman crew spent two years restoring an old yacht christened Maiden in spite of perpetual blatant sexism and predictions of doom and their deaths. Not only did they survive the race they finish second in their class shocking the sports world.

“Maiden” is a taut gripping documentary about one young woman’s dream that will take you on a journey you won’t soon forget. Filled with thrilling amateur footage as well as present-day interviews, “Maiden” is wonderfully suspenseful. But beyond the social political ramifications of what their story represents, it also is a riveting up close and personal adventure of humanity being pitted against the unpredictable nature of the seas.

“Maiden” will make you cheer.